Right here in my own back yard!

When choosing a mascot that’s a dinosaur with the lower body of a pony, you’re setting the bar high for crafting a beer that will be just as memorable in taste. Started last year by Keil Jansen (who quit his job as a special education teacher to take his home-brewing hobby to the next level), Ponysaurus Brewery indeed lives up to the challenge. Jansen is joined by David Baldwin (of Raleigh-based Baldwin&), who created the intriguing design for the bottles, and Nick Johnson, who heads up The Cookery—a unique commercial space for food entrepreneurs in Durham, where Ponysaurus brews out of its one-and-a-half-barrel system.

“There is a certain tension within the entire Ponysaurus design, where we are trying to balance a sense of the absurd and fantastical with the fact that we are dead serious about making the best beer,” Jansen tells CH. “The combination of ‘old-timey’ details, for example the style of the Ponysaurus drawing that invokes old medical or biology textbooks with the fact that the drawing itself is of a half-pony, half-dinosaur is an excellent shorthand for what we wanted to achieve.”

Because Ponysaurus is a nanobrewery, Jansen can get creative without too much of a financial risk, and can pay close attention to the quality of each batch. The downside is for customers; the small batches that are produced can sell out within the course of just a few days. We waited quite a while to get our hands on some bottles, but it was worth it. Their most recent offering, Bière de Garde Ale (or “beer for keeping”), is an homage to the traditional French farmhouse ales that were higher in alcohol content; they kept longer in the barrel than their low-alcohol counterparts. Thus, Bière de Garde was brought out for special occasions. Evoking the farm by using three types of barley, wheat, rye and oats, this well-rounded ale isn’t a fair-weather friend. With a strong finish, the flavor remains; the wheat flavor is bold but not overbearing. It makes for a perfect summer ale, especially with flourishing notes of apple, pear, almond and vanilla.

To view a full list of their offerings as well as their stockists (currently only in Raleigh and Durham), visit the Ponysaurus Beer website. 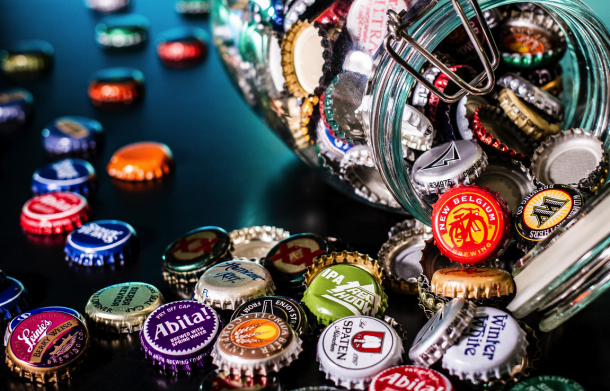 Good article from The Consumerist.

Twenty years ago, everyone had that one friend who always insisted that the funny-named beer (possibly with a cork) they brought to a party was soooooo much better than the Budweiser/Miller/Heinekin swill everyone else brought. “This Knucklechucker Belgian Quintuple Stout IPA will beat a Coors any day of the week,” that friend would declare. Some short-sighted folks laughed at the beer aficionado, but now it’s sometimes hard, if not impossible, to find a boring ol’ big-name beer at some bars where craft brews dominate the taps. But is this golden age of variety coming to an end?

The Philadelphia Daily News’ Joe Sixpack (his family name was apparently Ponykeg, but it was changed at Ellis Island) takes a look at the various arguments trying to prove or deny the impending popping of the craft beer bubble.

The doomsday seers claim there are too many breweries (some 2,800 in the U.S. alone, with many more slated to launch), making too many brands for a limited audience.

Much like independent music or publishing, the only way to survive is to either carve out a big enough niche and keep your costs low (and prices high), and be happy just to stay in business. Or you can sell out to Big Beer like the folks at Goose Island, ensuring the survival of the brand you created but ceding control. Alternatively, small-to-medium breweries can band together as one company or consolidate things like distribution and other expenses to help stay afloat.

And even if a craft beer is frickin’ awesome, many of them have to charge a premium just to make any money. Alas, while there are plenty of people willing to drink whatever’s cheap, craft beer drinkers only account for about 10% of all sales.

So that’s it, right? Nothing left to do but call it a day and watch as the craft brewers go all Hunger Games on each other… Not so, claim the optimists in the industry!

“I don’t think the bubble is about to burst,” the owner of the recently opened Conshohocken Brewery tells the Daily News. “If anything, we’ll be taking an even bigger bite out of the big guys.”

Those who say the bubble isn’t bursting (or who deny the existence of a bubble) look at the same stats as the pessimists but see something else in their crystal beer stein.

Too many breweries? Pish-posh! If the U.S. had the same brewery-to-person ratio as Germany, there would be nearly double the number there are now, and that would still only be about two-thirds of the 7,000 wineries currently operating in the U.S.

And this business about brands cannibalizing each others’ market share? Pure gibberish, claim the optimists who point out that most craft beer fans are rarely dedicated to a sole brewery or brand and — like oenophiles — are often looking to explore and give new beers a try.

So the future of craft brewing isn’t about taking each other’s audience, it’s about convincing the casual beer drinker who orders a Bud or a Coors because he just doesn’t know better.

And the glass-half-full types claim that the children are the future of craft beer — or at least they will be when they reach adulthood (or get passable fake IDs; not that we condone that, but we know a guy… never mind).

Many people of my generation — those who remember the advent of the video game, who can recall the first e-mail they wrote or the first computer they bought — had to be converted to being craft beer fans. The next generation, many of whom are growing up and eyeing with curiosity those dark bottles with the oddly illustrated labels. When these kids start buying beer for themselves, it’s likely that a larger percentage of them will want something other than the stuff you can get by the gallon at Dollar Beer Night.

Obviously, some small companies will fail — whether it’s because they made a bad product or just didn’t know how to sell it — that happens in any industry. But here’s hoping that we have at least a few more rounds before they ring the last call bell on this bubble.